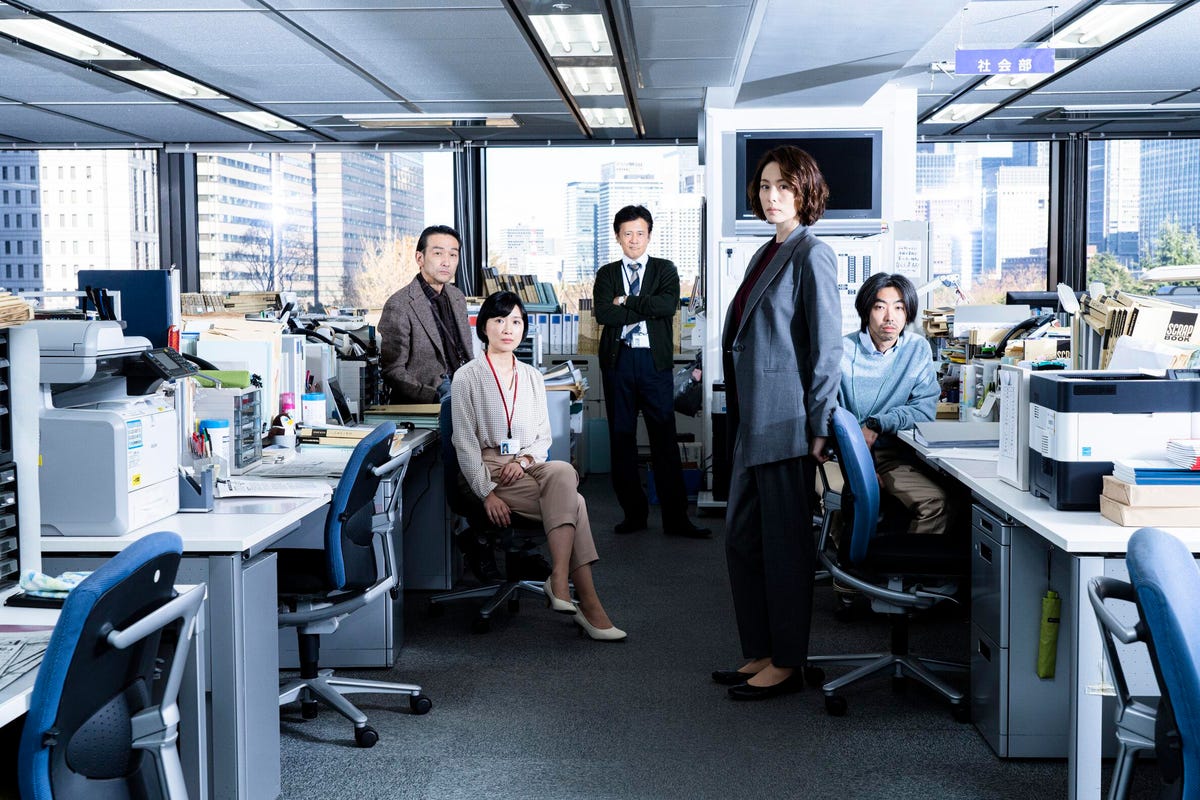 Many of the familiar themes associated with modern journalism materialize in the first ten minutes or so of Netflix’s
new-ish drama series, “The Journalist” — a 6-episode Japanese-language production built around a maverick, always-stylishly-dressed newspaper reporter who we first meet at a press conference. The reporter, Anna Matsuda, is grilling a government functionary about a purported misuse of public funds as he glowers at her from behind a microphone.

Also in the opening moments of this series that debuted on Netflix earlier this year — but flew somewhat under the radar — we get glimpses of a powerful state bureaucracy, and scenes of shadowy agents moving in to arrest someone. As well as a young man who, ironically, works for Matsuda’s newspaper but doesn’t actually read it. That’s what his smartphone is for, he confesses.

An older man berates him for a lack of enthusiasm about the paper’s attempt to hold power to account. “That’s the trouble with young people nowadays.”

The series, from director Michihito Fujii, is one example of something news junkies will surely appreciate, amid the onslaught of fresh streaming releases that are constantly debuting on the major platforms: Journalism actually serves as a backdrop for many of the newest titles. From Netflix, as well as HBO Max — and even Roku, which has for a year now been steadily ramping up its investment into original content.

In addition to Netflix’s aforementioned “The Journalist,” the original content from Roku includes an Australian drama, “The Newsreader,” which is set in the world of broadcast news in 1986. Sam Reid and Anna Torv play TV reporter Dale Jennings and star news anchor Helen Norville, respectively, a relationship around which the show builds a narrative about TV journalists covering the big stories of the day. Including the Challenger space shuttle disaster, the AIDS crisis, and more.

Like a Rolling Stone: The Life & Times of Ben Fong-Torres

I’ve already written at length about this documentary focused on a former Rolling Stone magazine rock writer who captured — and who, some would say, used his pen to define — one of the most exuberant periods in the history of modern popular music. Bottom line: This film, from director Suzanne Joe Kai, is as much a behind-the-scenes look at the news business as it is a time capsule for music fans. Sounds and fads change, and so did the scrappy staff and long-form narratives that used to define the version of Rolling Stone magazine presented herein. The one with its cult following that was forced, eventually, to abide by the imperatives of the Internet.

The Photographer: Murder in Pinamar

The perils facing journalists in some Latin American countries are well-documented. This particular Netflix documentary tells the story of the murder in 1997 of a photojournalist in Argentina. The killing of José Luis Cabezas, however, not only shocked the country. As Netflix’s official summary explains, “It ultimately revealed an organized crime network which appeared to involve the country’s political and financial elite.”

HBO Max’s stylish new “Tokyo Vice” is a thriller that mixes yakuza gangsters, an American journalist, and the seedy, neon underbelly of Tokyo into an amalgam that one review has dubbed “newspaper noir.” The show is loosely drawn from reporter Jake Adelstein’s book “Tokyo Vice: An American Reporter on the Police Beat in Japan.” And if you don’t look too deeply under the surface of this story about an American journalist and his exploits in and around the Tokyo underworld, the result is a thrilling crime drama that should easily hook news junkies and general audiences alike.

When director Daniel Roher’s documentary about Russian opposition leader Alexei Navalny got a limited theatrical run in April, the film bowled me over so much that I went right back the following night to see it again.

“Navalny” tells the story of how the now-45-year-old dissident political figure — and fierce Putin critic — became one of the few people known to have survived a Kremlin-backed poisoning attempt that involved the nerve agent Novichok. After recovering, the charismatic Navalny not only picks right back up where he left off, with his anti-corruption and pro-democracy activism — he also links up with Bellingcat investigative journalist Christo Grozev, who helps him use international press attention to name and shame the hitmen who tried to kill him.

The documentary hits HBO Max on May 26, after originally being set to air on CNN+ prior to the latter’s abrupt implosion. Part spy thriller, part journalistic odyssey unfolding in real time, and partly a prequel to the ongoing Russian invasion of Ukraine, “Navalny” is in large part the story of one man’s acceptance of his eventual incarceration in Russia — where he remains for now, at Penal Colony No. 2 in the town of Pokrov, east of Moscow. Having acknowledged the inevitable, he relies on the power of both citizen and institutional journalism to keep poking at the greed and malfeasance of Putin’s kleptocracy during his final weeks and months as a free man. 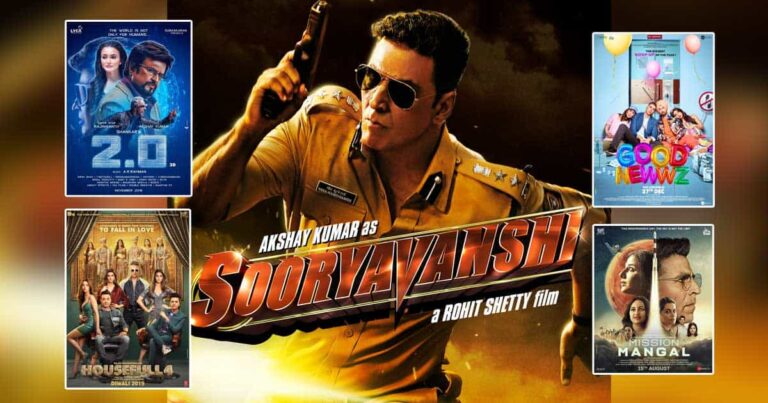 Will Sooryavanshi Make It To Akshay Kumar’s High 10 Highest Grossing Movies?(Pic Credit score: IMDb) It’s Diwali right this moment and belief us, it’s a dhamakedaar one with huge releases like Akshay Kumar-Katrina Kaif’s Sooryavanshi, Rajinikanth’s Annaatthe and Marvel’s Eternals making it to the silver display. Whereas we’re positive followers can be flocking to theatres… 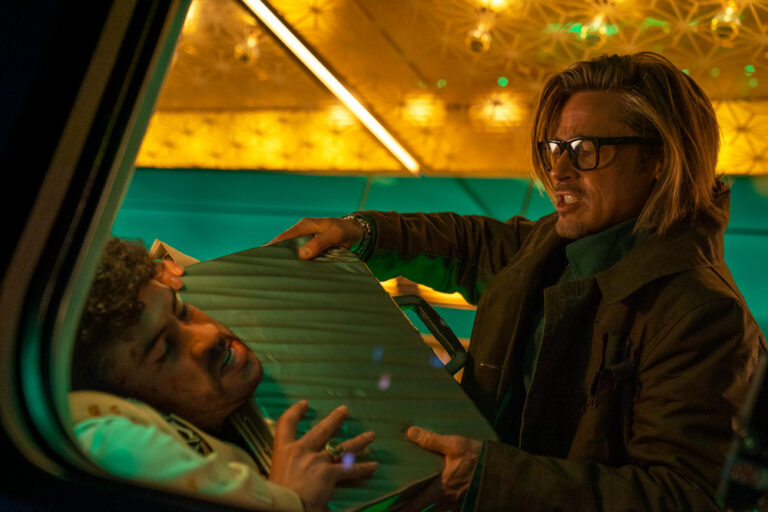 This is it. This is pretty much the end of summer. Sony is pulling in Bullet Train, the last big tentpole of a summer that has grossed $2.9 billion domestic through the end of July per Comscore, +142% from the same pandemic period a year ago, but off 17% from the May-July summer frame in 2019. July… 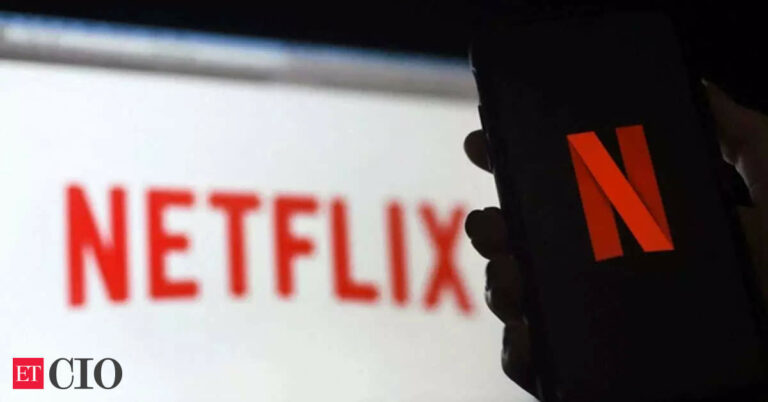 The platform is accelerating its push into video games. Since last November, the company has been rolling out the games to keep users engaged between show releases. Streaming giant Netflix has ramped up its dream to make it big in Cloud gaming, as the company hunts for professionals to take on Cloud gaming services like…

A person holds a placard as he attends a rally in help of the Netflix transgender worker walkout “Stand Up in Solidarity” to protest the streaming of comic Dave Chappelle’s new comedy particular, in Los Angeles, California, U.S. October 20 2021. REUTERS/Mario Anzuoni Oct 25 (Reuters) – Comic Dave Chappelle on Monday addressed the transgender…

Inspector Angad Mallik is shocked when the coroner, ostensibly a person of science, declares after analyzing the useless physique of a teenage woman that she will need to have been killed by a supernatural being that the locals name the ‘Nar Tendua’. Angad, performed by a really stoic Parambrata Chattopadhyay in Netflix‘s Aranyak, can’t disguise… 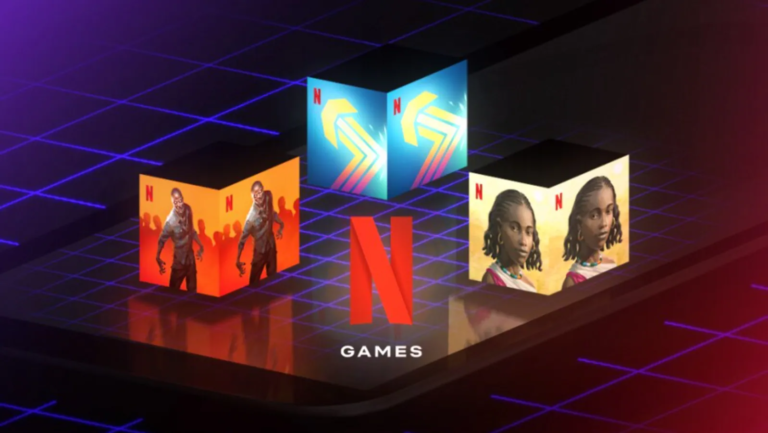 Netflix Video games has added three new video games to its record. These are can be found to obtain for iPhone and Android customers. Again in November, Netflix did one thing uncommon! The worldwide OTT platform which is in style for its unique films, web-series, documentaries, stepped into the gaming trade. Within the preliminary stage,…